These are a few of our recent case histories.  If you would like to speak to someone who has learned how to use a tablet with Stroud Computer Training, we can put you in contact with a client who can answer your questions about their experience honestly. 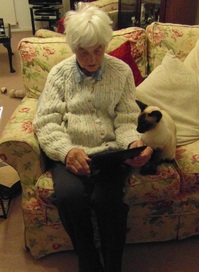 Miss G from Stroud was having trouble with her laptop as she has arthritis in her fingers.  Having seen an article in the press, Melissa went to see her.  Problems with setting up her online banking, her Amazon account, filing emails etc were soon sorted out.   Having seen the issues raised by using her laptop - (including not being able to move it from one room to another, the difficulty regarding use of the keyboard), Melissa showed her a couple of tablets, an Apple and an Android.  Finding one of them much easier to use, Miss G acquired an Asus Memo Smart 10" tablet by ordering it online from the nearby Tesco.  The touch screen is proving simpler for her and being able to order her medication online has saved a lot of trips to the doctor's surgery.  Miss G and Miss S are now e-Pals and have spoken to each other on Skype too!

It is not often that I have an extra trainee with beautiful brown ears and matching paws, but Sparky seems very interested in technology. 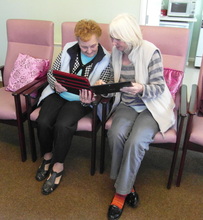 Miss M and Mrs D who live in a sheltered development in Cainscross had an introductory lesson together on a desktop Windows 7 PC.  Neither of them have used a mouse before and that proved to be quite a stumbling block, although they both improved rapidly.  Having looked at three different types of tablet, (Apple, Asus and HUDL), they are both off to Tesco to acquire HUDL's.  A couple more lessons should make them both feel comfortable using them and they are both keen to join our e-Pal scheme, once they have access to broadband.  At the moment they only have it in their residents lounge via a desk top PC, but it may be possible to extend the coverage through the development. 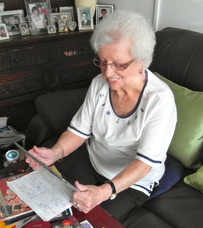 Mrs. C has arthritis, osteo-arthritis and Parkinson's but still remains an amazingly cheerful lady.  She has her own iPad but had not had any real help in how to use it until the end of October.  After one session, she is now fairly comfortable with sending, receiving and replying to emails.  She was put on Facebook by her grandchildren in July although its uses were unknown. Now she knows how to look at it and hopefully will be able to communicate with all the youngsters in her family.  Mrs. C has joined our e-Pal scheme and has already been put in contact with another iPad user.
Mr. M from just outside Stroud was having real difficulty with his brand new laptop that had Windows 8 installed.  Nothing that he was used to seeing with Windows 7 appeared on the screen at all.  New ways of opening up his various programs were learned, and Skype too in a couple of sessions.  Mr. M. is seriously considering buying a tablet as he has similar issues with regard to being constrained and unable to use it anywhere he wants to.

Mrs. L from a village outside Stroud was having difficulty remembering how to find her way around Windows Live Mail after the system had been upgraded.  One session later her understanding of email was much improved and she had learned how to use Skype as well.  As one of her sons lives in France, this is a real boon.
Mrs. W from Bridgend has a Windows 7 laptop and a wireless printer.  They were not communicating with each other, so no printing possible.  That problem was solved in a couple of minutes.  Mrs. W also wanted to know how to transfer her pictures from her digital camera to her laptop - "aaah, that is what that little slot is for" and her Windows Live Mail is now set up and much easier to use than her previous webmail solution.

Six very enthusiastic residents in a Sheltered Housing development in Wiltshire have been given several training sessions together on their laptops.  Despite running three variants of Windows in the group, they all learned how to use Google for research with multiple tabs, how to change their network connections to go online in different places and all are now Skype users.  Their determination to get stuck in was impressive, as were the humorous asides, and their next session is booked for a fortnight's time.  This session will cover ordering prescriptions online, setting up online banking, password strength, improving email skills and connecting digital cameras to transfer pictures.